Habits are stored by the brain in the Basal Ganglia, a golf-ball-size mass of tissue smack in the center of the brain. Habits save the brain work. When a habit is formed and stored in this region, the rest of the brain stops fully participating in any decision making with respect to that habit. There is very little processing power involved with respect to habits. 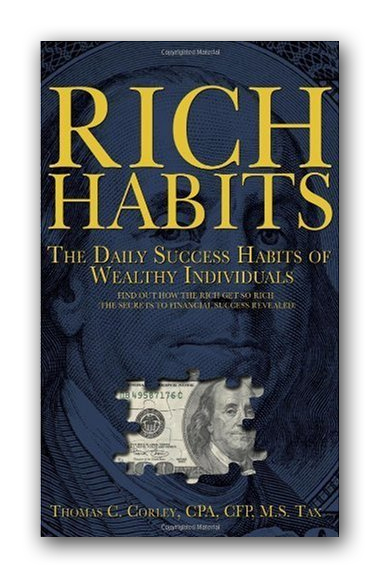 Here’s the shocking thing: 40% of all of our daily activities are habits. This means that 40% of the time we are all on auto pilot. We are thinking and doing things without the rest of the brain even being aware of the activity. We don’t realize how significant habits are in our daily lives. Habits make us who we are.

Any mental thought, often repeated, becomes a habit. Habitual thoughts make you who you are. Poor people are poor and rich people are rich because of the way they habitually think. Their habitual thinking comes first and their habitual activities follow. If you habitually think in a certain way you will habitually act in a certain way. Greatness requires great thoughts. To become rich you have to learn how to think like a rich person. To avoid poverty you have to understand how not to think.  Let’s look at the latest research on how poor people think.

Now let’s look at how rich people think about the same things.

Let me give you an example. Suppose you add the Rich Habit of jogging 20-30 minutes every day. What happens? You begin to lose weight. Someone notices and compliments you. You feel good. So you keep exercising. More people notice and they compliment you. You feel even better than before. Now you start to crave more of those compliments. So you start to watch what you eat. You throw in a few vegetables and throw out a few bags of potato chips. The number of junk food calories you eat (a Poverty Habit) starts to go down. Then you decide to jog even more. But the problem is you smoke cigarettes and you cough like a maniac after every jog. You decide to cut back on smoking cigarettes (a Poverty Habit), maybe even eliminate them.

This is the power of the Rich Habits. No will power required. When you add a few Rich Habits to your daily routine they compete with and eventually overpower your Poverty Habits. Your seesaw then begins to tip in the right direction….. towards success!

Business success factors: Your Views of Businesses & Being in Business
Go back